Let’s turn back the clock...and look at one specific micro cap stock: ATRN

Sure it ended up as a total loss for people who held too long. Sure, some folks didn’t “get it” that this was just a trade…and not an investment. Aside from that, this stock was truly a life changer for some people. Specifically, to the tune of over one thousand percent gains. Still sound a little foggy? Ok how about this. Imagine you put $500 into ATRN back in early 2012 (not that long ago, right?). You then went on a ski trip that lasted…6 weeks (lol). Oh, and there was no internet, no cell phone signals….nothing. So you couldn’t check your trading account until the 6 weeks was up. Far fetched, yes, but play along will you?  😐

I’ll discuss why it had such a monstrous move in a second. Let’s take a glance at the chart (you can’t pull it up on stockcharts dot com anymore because of the fact that this stock is now delisted): 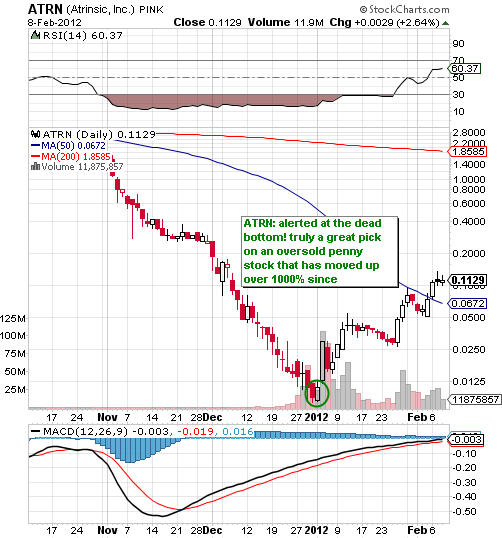 We penny stock guys love us some charts don’t we? And this one is about as pretty as they come. The chart tells you this move was no fluke. An authentic move from about one cent to eleven cents, in just about six weeks on big buying volume. What’s that you’re saying? You wish you would have loaded up before the big move? Well….let’s talk….

I actually know someone that was up over 3,000% on this stock. Yep. See, ATRN went on to go up to the 30 cent range soon after the time period displayed in the chart above passed by. Full disclosure…I don’t know when this person sold. So…how did this person know to get in ATRN in early January?

This subscriber (who is actually a nice lady) emailed me asking me what she should do after she learned her shares were up an astounding 3,000%. I recall emailing her and telling her she should consider selling at least half of her shares, if not all. Again….I don’t know what happened after that though. She never emailed me again. Maybe she bought her own ski resort? LOL.

About a year later I noticed her subscription was no longer active. So the question remains…where in the world is Ms. ATRN 3,000%?

Ok, back to business. Enough tootin’ my own horn, for sure. Since you’ve read this post (or at least skimmed down to here), maybe you want to know why I alerted ATRN? To be certain, I don’t have a hard copy of the news that triggered the move. Finding news from a year or more ago on a stock that doesn’t exist anymore is almost impossible. But I can tell you this: As I recall, the company announced that they had reached a deal for most of their convertible debentures to be retired. Make sense? No?

Convertible debentures are more commonly known as the instruments that bring on a crap load of dilution. Surely you’ve seen people on message boards belly-aching about dilution? It’s basically a bunch of shares that are sold on the open market, that drive the prices of shares of penny stocks down, down and down more. So you can see the rationale here, hopefully. Once dilution stops, a stock is relieved from much of the downward pressure that we see so many penny stocks under.

From this example, perhaps you can see why it’s worth paying for a penny stock newsletter, like mine? (watch out for the paid promoters, though, they’ll getcha!) If so, you can give it a go here for a small monthly investment that could turn out to be a big boon for your financial scenario.

NOTE: I am not in ANY WAY shape or form trying to tell you that all of my stock picks work out. Some of them will be losers…so don’t go throwing the wad of money under your mattress that you are saving for Armageddon into just one pick. Be smarter than that and divide your trading capital into portions. That way you can live to trade another day if a pick ends up being a loser.

Edit: I decided to post a little screenshot of the profit I made off of ATRN (yep, I traded it too)…it could have been more but it was still nice:

Get a Trackback link